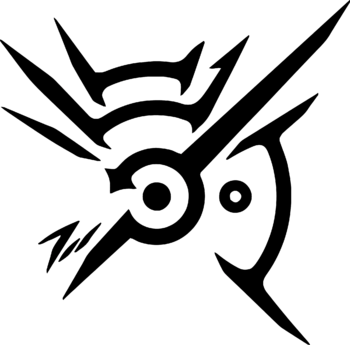 "I gave you my Mark for a reason. I wanted to know what happens when you take an honorable man's life away, when you push his face down in the mud. What will he do, given the chance?"
— The Outsider
Advertisement:

Dishonored is a franchise of games and transmedia published by Arkane Studios. It's a New Weird Steampunk Urban Fantasy Stealth-Based Game Immersive Sim with RPG Elements.

It is set in the Empire of the Isles, a Fantasy Counterpart Culture of early to mid-19th Century Europe during an industrial revolution triggered by the discovery and harvesting of whale oil that leads to much social tension. It's led to the ascendancy of science, commerce, and technology over a more archaic social system of corrupt nobility, clergy and gentry, accompanied by the fading and displacement of an earlier tradition in occult magic grounded in the collection of runes and bone charms, that is largely being driven underground by the overseers of the Abbey of the Everyman and their magic-repelling devices. The plot of the games concerns beings who are marked by the Outsider, the mysterious godlike being who lives in the Void, an Eldritch Location residing in the space on the borderland of dimensions and dreams. Individuals with the mark of the outsider, through use of powerful runes and bone-charms, have access to magical powers that allow them to change and shape the world. The Outsider gives his mark only to people who interest him, those whose moves he can't predict and anticipate.

Much of the plot of the first two games concerns a series of coups faced by the Royal Family of Dunwall, with Royal Protector Corvo Attano receiving the Mark of the Outsider to better aid him in his quest for revenge, while the sequel follows the adventures of his daughter Empress Emily Kaldwin. Extended DLC for the first game, and the standalone titles, focuses on the Assassin Daud and his apprentice and ally, Billie Lurk.

So far, the series has the following entries:

Multiple entries in the franchise use these tropes: