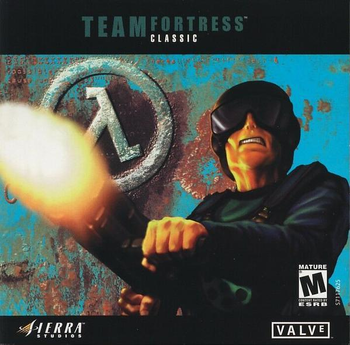 Team Fortress Classic is a 1999 multiplayer First-Person Shooter by Valve Software. It's an official, improved port of the original Quake mod, dubbed Team Fortress. It was released to ease the wait between it and Team Fortress 2, its soon-to-be-released sequel (which, considering Valve Time, naturally was released eight years later), and was often packaged with Half-Life, which it is a modification of. It was also free on the disc for anyone who owned the original WON version of Half-Life.

Unlike its cartoonier sequel, Team Fortress Classic cribbed the bulk of its visuals directly from Half-Life, and had no backstory at all. Two teams, Red and Blue, either try to steal each others' flags, assassinate a scared-looking fellow, or impede their progress through a desert or Italian town. No corporation civil wars, no Multinational Team of misfits ... just nails and bullets and grenades.

There are three basic gameplay types: Control Point, Capture the Flag, and Assassination/Escort

It was later inducted into the canon of Team Fortress 2, placing the Classic teams between TF2's teams and the original 1850's teams, as Mann. Co's 1930s paramilitary fighting force.