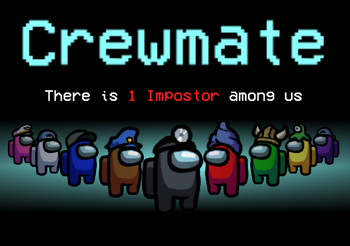 You're a sneaky little impostor
Aren't you? Aren't you?
A social deduction game's premise is simple: there are at least two teams with contrary goals. One of these teams is often smaller, villainous, hidden within the larger group, and working together to achieve some nefarious goal such as sabotage or killing the other players. The other players then have to figure out who the traitors are. This is often done through some Witch Hunt-esque combination of questioning, catching them in the act, or voting them off, while the traitors avoid suspicion by deflecting, bluffing, or pretending to be innocent.
Advertisement:

Werewolf (1997) is the Trope Codifier and many games follow this template: there's a secret killer hidden within the group, and the rest have to figure out who it is before all Ten Little Murder Victims are offed one by one. However, there are many ways to expand and complicate the Social Deduction Game, such as by adding more teams, roles, and various other mechanics, or by mixing it with other genres. Some games have this as an optional or random aspect of the larger gameplay.

Compare The Mole, as identifying the hidden traitor/s is usually one of the objectives of the game, Ten Little Murder Victims, and Blending-In Stealth Gameplay, which usually involves hiding from the AI. On the Sliding Scale of Cooperation vs. Competition, this genre falls under either "Treacherous Teammate" (when there is only one traitor player) or "Informed Minority vs. Uninformed Majority" (when there are more traitors and they cooperate with each other).

Oliver's party game involves everyone except one being a serial killer. Each round the killer kills someone and the group votes on who they think it is. If they vote wrong, the accused also dies.

Oliver's party game involves everyone except one being a serial killer. Each round the killer kills someone and the group votes on who they think it is. If they vote wrong, the accused also dies.