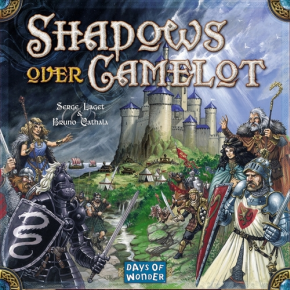 Shadows over Camelot is a 2005 cooperative Adventure Board Game where the players take on the roles of the Knights of the Round Table going on heroic quests and defending Camelot from the encroaching forces of evil... except one of them is secretly a traitor plotting the kingdom's downfall.
Advertisement:

The game won the prestigious Spiel des Jahres award in 2006 and received an expansion, Merlin's Company, in 2008. The rules of the game are available here