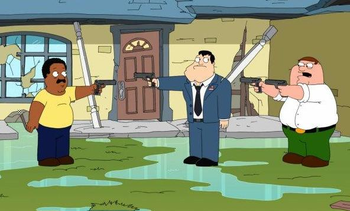 Cleveland, Stan and Peter pointing guns at each other.
"You think you're the only superhero in the world? Mr. Stark, you've become part of a bigger universe. You just don't know it yet."
— Nick Fury, Iron Man
Advertisement:

When The 'Verse is shaped by multiple creators writing independently, such as how many different comic book titles can be set in a collective continuity. This makes it easy to have a Crossover. In contrast, a single TV series with multiple writers is just the Verse with subcontractors. Likewise, when different continuities by the same author are tied together later by an Intercontinuity Crossover, that's Canon Welding.

As a rule, simply having a Crossover is not enough to qualify as a Shared Universe, as those tend to be standalone stories and have no further connections beyond that. Major events should be referenced across the different projects or characters are mentioned as having their own adventures somewhere else.

The nature of the Shared Universe — multiple independent creators creating one continuity — can easily lead to a Continuity Snarl if it lasts a long time and the different creators don't take care to keep things straight. If a Shared Universe starts relying too heavily on continuity, especially if it's obscure or too reliant on each work in the Verse, a Continuity Lock-Out may occur. When creators disagree on the direction the Verse should take, they may fight Armed with Canon. If some corners of the continuity are "off limits" to some characters to avoid theme-drift or plot derailing, then Superman Stays Out of Gotham.

When they go back centuries, and even further and further, long before copyrights and trademarks, the Shared Universe turns into one or more actual mythologies. Compare with The 'Verse, Expanded Universe, Canon. Contrast with Shout-Out.

When two works are considered to share a universe by the fandom, see Fanon Welding. Not to be confused with Public Domain Canon Welding, which is when an official work uses Public Domain assets and presents it as a Shared Universe.