"Dreams are fictitious things that are molded into reality through mortal hands."
— Robert Sterling, founder of Selene's Promise 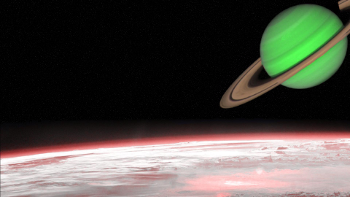 Ilion, the moon featured in the wiki's background
Advertisement:

Galactic Crucibles is a large Science Fiction Shared Universe comprising of a series of short stories and encylopedic-style article entries using wikia format. Founded on March 13, 2012, the wiki is set in a hard science fiction universe. Most of the wiki's stories take place in the Omni 01 universe particularly revolving around a Space Opera setting. Originating in 2009 as part of the Spore Wiki Fiction Universe, three years later it would break off into an entirely different series of its own and having very little to do with Spore.

Galactic Crucibles focuses heavily on professionalism. Anyone can contribute to the wiki, though new writers are required to put their ideas through a quality assurance test to make sure it fits the setting.

After its first year anniversary, the series received numerous reboots in an attempt to fix some long standing problems including the use of numerous Dicredited Tropes. New rules were also made to remedy past conflicts.

Formerly, the wiki was science fantasy until a sister project spawned from it. Galactic Crucibles retained the science fiction elements, while the fantasy elements broke off into a new wiki called Erudite Tales. Erudite Tales is a fantasy-based counterpart drawing heavy influence from Dungeons and Dragons although the series gradually evolved to become something more original. Later, a third, alternate history-themed spin-off, Infinite Histories, was founded. A fourth, horror-themed project, Hallows Maleficent, was short-lived and is now abandoned. Together, they comprise the Omniverse Nexus Wikis.

In June 2014, a spin-off known as Tapestry of Stars was created by the original authors. While similar to its parent wiki in terms of setting and species, To S has more tightly controlled user content, and it is set in an Alternate Continuity. The original Galactic Crucibles is still open to new users.

The following years saw a relative decline in activity although edits still occur. The wikias are in the process of being rebuilt and migrated into their own separate domain all under the shared name "Omniverse Nexus".

open/close all folders
General Wiki Tropes
Individual creations
Stories
Myth Galaxy
A much more fantasy-orientated universe, based more on the original direction of the wiki, after first moving from Spore Fan Fiction Wiki.
Erudite Tales
Infinite Histories
GC's 2nd sister project run by a number of the same authors. It's primary universe is a world where Rome never fell, and a powerful empire replaced the Islamic Caliphate. However, the wiki contains several other verses, such as Atra Mors, an under construction Shared Universe where the Black Death wiped out civilization in Europe.
Tapestry of Stars