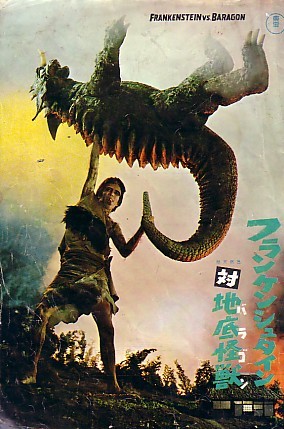 Frankenstein Conquers the World, known in Japan as Frankenstein vs. Subterranian Monster Baragon, is a kaiju film released in 1965 by Toho. It stars Kumi Mizuno, Nick Adams, and Tadao Takashima (who played Sakurai in King Kong vs. Godzilla). It was directed by Ishir⁠ō Honda, with special effects by Eiji Tsuburaya, and music by Akira Ifukube. It was produced by Tomoyuki Tanaka and Henry G. Saperstein, and was written by Takeshi Kimura and Reuben Bercovitch. It was distributed in the United States by American International Pictures, and was recently released on DVD in the US by Media Blasters, under their Tokyo Shock label, as a two-disc set containing three versions of the film.
Advertisement:

During World War II, the heart of Frankenstein's monster is transported from Germany to Japan, where it arrives in Hiroshima. On the day that it arrives, however, the United States drops the atomic bomb on the city. Fifteen years later, a vagrant child is found by doctors at a hospital in Hiroshima. The child soon draws interest when he begins growing, and soon becomes larger than a car. Eventually, the child becomes the size of a building, and escapes from the laboratory, but not before losing a hand. Studying the hand, scientists and doctors find that the boy possesses surprising regenerative qualities. After doing some investigating, it is discovered that the boy is actually the result of Frankenstein's heart regenerating after being exposed to the radioactivity of the city's bombing in 1945. The boy is subsequently named Frankenstein.

Meanwhile, offshore, an oil rig is struck by what is believed to be an earthquake, but one of the surviving workers sees something monstrous moving underground. Later on, people and animals start disappearing all over the Japanese countryside, and a small village is soon attacked. Frankenstein is initially blamed for these disasters, and the JSDF begins hunting Frankenstein throughout the forests of Japan. Meanwhile, when the scientists go looking for Frankenstein to try and prove his innocence, they are attacked by the subterrarian monster Baragon, a dinosaur that has survived underground. The JSDF stop attacking Frankenstein after the true culprit is revealed, and Frankenstein soon engages Baragon in battle, eventually killing the monster after the forest has been set on fire. In the international version, Frankenstein then attacks a giant octopus after defeating Baragon, but he is overpowered and dragged into the ocean, his fight with Baragon having weakened him. In the Japanese and American versions, Frankenstein falls victim to an earthquake when the ground collapses beneath him and he is swallowed by the Earth.