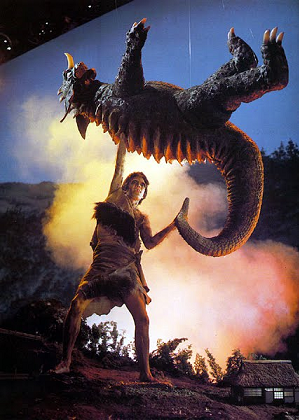 Some fights come with strings attached.
Where Special Effect Failure overlaps with Fight-Scene Failure, this is a scene where a supposedly animate object or creature attacking a character is obviously an inert object that the actor is trying to manipulate while supposedly "fighting" it.
Advertisement:

Usually this involves something small strangling someone or biting someone's throat, which allows the actor to stagger around holding the Prop to their neck and occasionally wiggling bits of it.

A common necessity in an era before cheap CGI or animatronics, but often looks rather comical now.