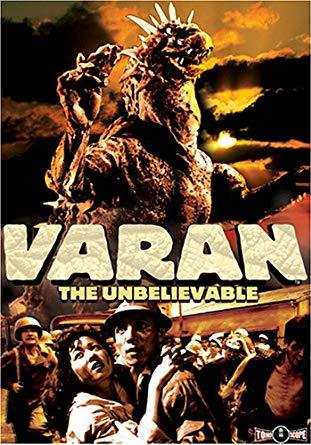 Varan, the Unbelievable, aka Great Monster Varan, or Varan, Monster From the East.

Also of note is that, because the film was intended for television, it was filmed in the aspect ratio of 4:3, and so the theatrical version of the film features a cropped image, being the world's second and last instance of a movie released in Toho Pan Scope, the first being a 1957 Japanese re-issue of Godzilla: King of the Monsters!, but that's a different story.

The film had already had a television score composed by Akira Ifukube, but with the movie being refit for theaters, he was given the chance to go back and rework the score to make it fit for a theatrical film. The result is one of Ifukube's most influential and recognizable scores ever...if you've seen the Japanese version of the film, that is. The American version, released in 1962, absolutely butchered the score...and everything else. Ifukube would reuse pieces of this score in countless other movies, with modified varations of certain pieces found in Ghidorah the Three Headed Monster, King Kong vs. Godzilla, Mothra vs. Godzilla, Frankenstein vs. Baragon, Battle in Outer Space, Godzilla vs. Gigan (although all of the music in that film was stock music, except for one piece at the end which wasn't composed by Ifukube) and many more.

This film contains the following mysteries of the twentieth century: