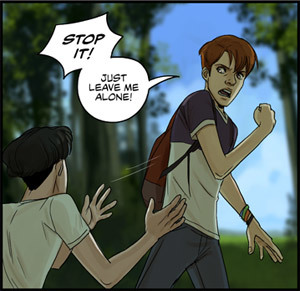 "Stop it! Leave me alone! You're the one who's going to get hurt!"
— Haruka Kotoura, Kotoura-san
Advertisement:

Anyone who refuses help with this phrase is convinced that they need to keep their problems secret and solve them on their own. This can only end one way: learning An Aesop about pride. Unless they say "leave me alone" and then add, "nothing's wrong" or "I can take care of myself" or "it's none of your business". In that case, they've screwed up even more badly, and may get themselves killed before they can learn their valuable lesson. The character will eventually learn that doing things alone causes problems and accepts The Power of Friendship.

Of course, every now and then there's a character who is so badass that they really can handle everything themselves. They never say "Leave Me Alone". They say "you'll have to trust me" or "don't help me when I don't want to be helped" or something that sounds equally high-minded. Unless, of course, they resort to the classic "Stay out of my way," in which case An Aesop about teamwork may not be far off.

Compare Don't You Dare Pity Me! and Think Nothing of It, both of which can express this in certain situations. Compare I Work Alone if it's characters who reject an offer to work with a team.