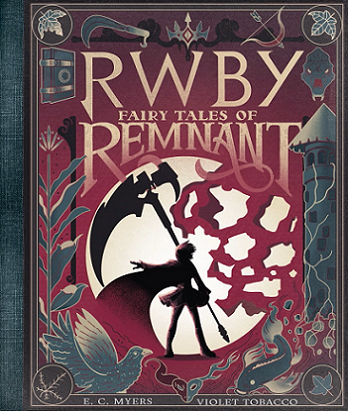 And they lived.
Whether they're true stories passed down through the ages or myths defying time itself, our stories help explain who we are and why we're here. They give us solace when we need it, advice if we seek it, and connections that bind us together as one people. If you don't believe in stories, if you can't accept their truths, then you will always seek and never find.
— Professor Ozpin
Advertisement:

Fairy Tales of Remnant is a book about the fairy tales that exist in the world of Remnant, written by E.C. Myers and illustrated by Violet Tobacco. The book sits within the RWBY canon, a CGI animated series by Rooster Teeth, and was released on the 15th September 2020 by Scholastic, Inc. An audiobook version was also released on the same day, with narration by Jesse Vilinsky and Shannon McCormick, Professor Ozpin's voice actor.

Containing twelve fairy tales, some of which are mentioned in the main show, Fairy Tales of Remnant is written as if it's the personal copy of Professor Ozpin, and represents the culmination of a life's work researching the world of Remnant's fairy tales. It contains both a foreword and an afterword written by him, and is scattered with notes throughout the book containing his thoughts about each of the tales.

Some of the fairy tales were turned into a series of animated shorts in 2021.

Tropes pertaining to individual fairy tales are troped on the RWBY: World of Remnant page.

E.C. Myers is also the author of several canon-setting novels that are listed on the franchise page.

When you finish a story, turn the page and start a new one. When you close a book, pick up another. Or of course you may always read this one again.