Literature / The Lion, the Witch, and the Wardrobe 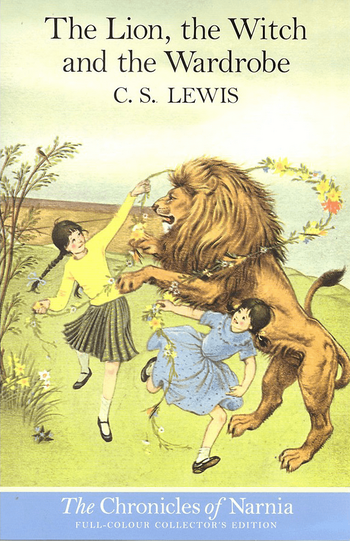 The first written, first published, second book chronologically and the most famous of the seven books of The Chronicles of Narnia.

Some forty years after the events of the prequel The Magician's Nephew, four siblings (Peter, Susan, Edmund, and Lucy Pevensie) pass through a magical wardrobe owned by "Professor Kirke" into the land of Narnia which has been cursed with eternal winter by Jadis, the White Witch, who calls herself the "queen" of Narnia. In accordance with the prophecy, the children, helped by Aslan (Turkish for "Lion"), defeat her, and are jointly crowned as the four Kings and Queens of Narnia. After fourteen years, the children accidentally return through the wardrobe, reverting to childhood.

The action of The Horse and His Boy takes place during their reign. The Pevensies' journey is continued in Prince Caspian.