Faeries Don't Believe in Humans, Either 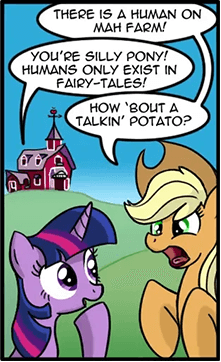 "So you don't believe in dragons?
It is curiously true
That the dragons you disparage
Choose not to believe in you."
— Jack Prelutsky, The Dragons Are Singing Tonight
Advertisement:

Two races, or tribes, were familiar with each other's existence a long time ago but they have gone ages without contact with each other, and now each believes the other to be creatures of legend, that either never existed or died out long ago.

Until they meet each other. And they both react exactly the same way: by saying something along the lines of "They do exist!" in a tone of awe. At the same time. (Or at least one directly after the other.)

Compare Mutually Fictional, where the two sides really did originate as (or still are) only stories to each other. Also compare Fantastic Fantasy Is Mundane, where creatures in another world make up stories about a world like ours.

Alternative Title(s): You Do Exist Doubling