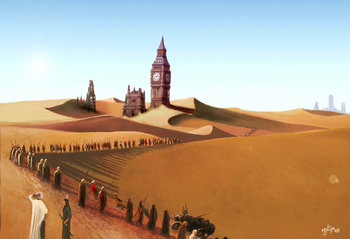 Why is it there?
You don't want to know why it's there.
Advertisement:

Sometimes an otherwise ordinary, commonplace, and utterly inoffensive object can become disconcerting simply by being found unexpectedly in a place which, by all rights, it simply should not be. Sometimes it's merely in an absurdly remote location, or one so far divorced from the object's apparent function that no one in their right mind would ever put it there, such as a lighthouse in the middle of the desert or a child's shoe in the cavity inside the wall of an old church. Other times, the object's presence is not only unlikely but impossible, such as the wreckage of a modern-day fighter jet embedded in solid rock several millions of years old or an abandoned 1950s-style diner on an uncharted alien world. It shouldn't be there. It can't be there. In any reasonable universe, it wouldn't be there. And yet... there it is, plain as the nose on your face, raising unsettling questions about who (if anyone) put it there and why, and what possible sequence of events could have led it to where it is, sometimes even going against reason at such a fundamental level that it calls into question the very nature of reality as you thought you knew it.

Depending on the story, the out-of-place object may never be explained, and may possibly not even serve any real role in the story beyond contributing to the general uncanny off atmosphere of an already creepy locale, while in other settings these are merely the result of Time Travel or Teleportation, though leaving it unexplained is often the most effectively unsettling.

Related to Ontological Mystery, which is when the thing you find somewhere you can't explain with no idea how it got there is yourself. Supertrope to Saharan Shipwreck, where a ship is found far away from water (e.g. in the middle of a desert), and Ominous Cube. Compare Anachronistic Clue.