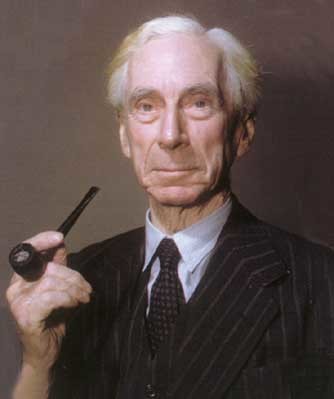 "It has been said that man is a rational animal. All my life I have been searching for evidence which could support this."
Advertisement:

Bertrand Russell, 3rd Earl Russell (1872-1970), was one of the foremost philosophers, mathematicians and logicians of the 20th century, famous for being the co-author (along with Alfred Whitehead) of the Principia Mathematica, one of history's most important and seminal works in mathematical logic. He also developed an analogy now called Russell's Teapot

Equally impressive is Russell's legacy as an essayist and social critic. He was imprisoned for his involvement in pacifist activities during World War I. After World War II, he became one of the leading activists for nuclear disarmament. He won the 1950 Nobel Prize in Literature for "his varied and significant writings in which he champions humanitarian ideals and freedom of thought". (Russell accepted the prize, but commented: "I feel like that intellectual but plain-looking lady who was warmly complimented on her beauty.") He remained politically active until the end of his life, vigorously protesting The Vietnam War in the 1960s.

Incidentally, the grandson of the Earl Russell, Prime Minister 1846-52 and 1865-66; the title Bertrand inherited was created for his grandfather. His grandfather, being a prominent liberal but a devout Presbyterian, would probably have had mixed feelings at worst about Bertrand's politics, which have been passed down to his descendants, the 4th-7th (current) Earls Russell—all have been vaguely leftists and/or disarmament advocates (the 5th Earl, Conrad, was the first Liberal Democrat Lord (and also a distinguished historian), the 6th a Labour councillor; both advocate(d) the abolition of the Lords) making them oddballs among the British aristocracy.

Bertrand Russell is associated with the following tropes: