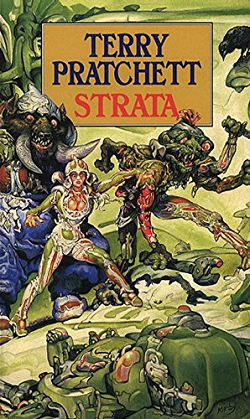 A Science Fiction, pre-Discworld novel written by Terry Pratchett, published in 1981. It explores the possibility of a Flat World, the concept that would go on to become the Discworld.

Kin Arad's job is building worlds for a mysterious organisation called the Company. One day she is contacted by Jago Jalo, a man claiming to be a 1,000 year old space traveller. He enlists her to travel to a strange world that he claims to be flat. Kin teams up with two aliens: Marco, a kung (4-armed amphibious Proud Warrior Race Guy), and Silver, a shand (tusked, hungry and bear-like, but ultimately friendly).

When the team arrives, they find a world that matches with the old myths about the Earth — it's flat, things go round it, stars are actually points on a sphere surrounding it, and so on. The technology of the world is still in the dark ages, and demons very much exist. The flat world appears Earth in all these points, except for being flat and only covering the equivalent of the Eastern Hemisphere.

It's also worth noting that the story seems to takes place in a universe subtly different from our own. This is evident from the use of alternate names for places, particularly Reme rather than Rome, and mentioning that Venus has a moon named Adonis. Furthermore, the main characters don't seem to have heard of Christianity, although Wicca and Buddhism exist. Aside from the main story, the book also delves into the nature of humanity (comparing it to the three or four alien races that are mentioned), and reveals another long-dead alien race that manufactured worlds wholesale — including, it is implied, Earth itself. The alien creator race was in turn preceded by another alien race even more advanced, and and so on, right up the chain to Energy Beings.

It has very many parallels (or rather antiparallels) with Larry Niven's Ringworld; to some extent it was intended as a spoof of it. Niven thought it was a perfectly fine work of Big Dumb Object epic SF by itself.