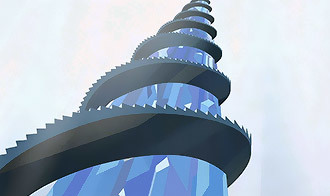 Even as an escalator, this would take too long.
"Whew! The Alps ain't got nothing on these stairs for climbin'!"
— Bugs Bunny, "From Hare to Heir"
Advertisement:

You think it's annoying when the elevator stops working and you need to climb three floors to reach your apartment? Be glad you don't have to face the Absurdly Long Stairway.

The Absurdly Long Stairway is so incredibly, well, long that ascending it is a serious challenge in itself. The characters will probably be utterly exhausted by the time they get to the top, assuming they will persevere that long. (Descending such a stairway tends to be easier, one way or the other, but not always.) Such stairways may have thousands of steps and stretch for miles. Indeed, sometimes they are literally endless.

These stairways can be found in man-made structures (such as very tall towers with no lifts) or more supernatural locations. They can have a major symbolic meaning, about ascension or spiritual uplifting or the like. They can find application both in serious works and in comedy. In the latter case, expect some unlucky Butt-Monkey to trip and tumble all the way down.

A notable subset of Absurdly Long Stairways are Absurdly Long Temple Stairways. In Real Life, a somewhat tamer version of this trope is relatively common in temple architecture, and may be observed in various Buddhist, Hindu, and Mesoamerican temples. Sometimes in fictionnote and rarely, in real life too, this is taken to extremes by placing the temple on the slopes - or even the summit - of a mountain, with stairs leading all the way up. The symbolism of ascending to the temple should be obvious; sometimes, as with the Aztecs, the long temple stairs were also used for a Staircase Tumble when they tossed the bodies of sacrificial victims down them.

A Stairway to Heaven may be one of these. Can be sometimes found in an It's All Upstairs From Here climax. Compare Endless Corridor. May be an Unnaturally Looping Location. See also Ending by Ascending.

Race on the stairs

Race on the stairs