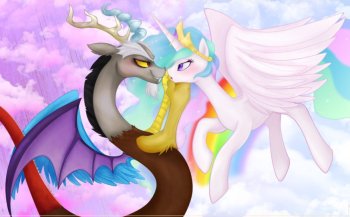 Chaos dates harmony? What is the world coming to?
Image

Used with permission.
"You are a wolf in rabbit's clothing taking advantage of a poor innocent little rabbit!"
— Sharon, PandoraHearts
Advertisement:

Take two characters: one sweet, innocent, kind, loving, naive, maybe even virginal, etc. In other words: an angel. The second character is malicious, rude, possibly perverted, ominously charming, sadistic, etc. In other words: a devil. Then you pair them up with each other. The main aspect here lies in the fact that the Devil character can do all sorts of things to torment the Angel character, or vice versa, and in the end the two characters will fall in love despite everything or perhaps because of everything (or not if the pairing is one-sided).

Generally, a combination of Mind Game Ship and Opposites Attract, with a dash of Draco in Leather Pants, depending on whether the 'ship is canon or not. In Slash Fic or some yaoi, the Uke is often the angel while the Seme is the devil.

We all know the appeal of Mind Game Ship, playing another person's mind like it's a game and what not, and this trope can go hand in hand with that one. It may overlap with Foe Romance Subtext, Foe Yay Shipping, or Dating Catwoman if the two characters are actual enemies in canon. Compare Beast and Beauty. Sometimes a I Have You Now, My Pretty scenario may occur from the devil to the angel. A Fetishized Abuser, Depraved Bisexual, Depraved Homosexual, Psycho Lesbian, or a Yandere may be the devil, and The Ingenue, All-Loving Hero, Plucky Girl, or Nice Guy may be the angel.

Sometimes for this trope in fanfic a previously tough character may be made into a more sensitive innocent character and vice versa. Sometimes the devil character may try to force another rebellious character to submit. More often than not the devil is male and the angel is female, though the gender-flipped variant is not unheard of.

Has nothing to do directly with Angel, though interestingly he could be on either side of the pairing.