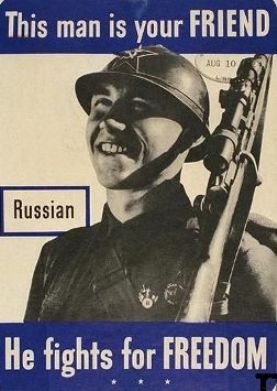 Note: This was before Dirty Communists was cool.
"I like Mr. Gorbachev. We can do business together."
— Margaret Thatcher
Advertisement:

The Communist bloc was locked in a Cold War with the Western world for much of the twentieth century. It's no surprise then that Western, and especially American, media tends to portray Communists as the baddies. Sometimes, however, fiction shows Communists in a more positive light — or at least, one more positive than that in which the Nazis will ever be portrayed (despite former Nazis similarly becoming American allies — and citizens! — during the Cold War). Maybe agents or soldiers from East and West have to team up to face a greater threat, collectively raising their Hammers and Sickles to defend their people rather than conquering others. Sometimes a non-Communist will find out that the Commies aren't so different once they get to know them. And sometimes, Western media will simply show Communists to be genuinely decent people who happen to favour a different social and economic system.

Though obviously virtually nonexistent in the Cold War, this was the default portrayal of the Soviet Union during World War II, during which the United States, Britain, and the Soviet Union fought on the same side against Nazi Germany. American propaganda of the time heavily emphasized the "strong leadership" and "great industry" of the Soviet Union, while conveniently ignoring the atrocities committed by the Soviet leaders. As a result, many Americans and Brits who were critical of the Soviet Union — including George Orwell — found it impossible to get their work published because supporting the Soviet Union was seen as necessary for the war effort.

This trope is likely to manifest in works where Capitalism Is Bad. Nostalgia Ain't Like It Used to Be, and as communism fell over 30 years ago, it is easy to contrast the "evil" capitalism with the proclaimed goals of communism (end of poverty, universal equality, better life conditions for the working class, etc), while conveniently ignoring the brutalities and fallacies committed by communist countries, and even their disastrous actual results in achieving such goals. Che Guevara is particularly benefited by this, treated akin to a rock star by many music bands.

Compare Heroic Russian Émigré, when the commies are actually bad, but the Russian White émigrés who escaped them are portrayed as good guys. Contrast Dirty Communists, Red Scare, Commie Nazis, Hollywood History. Interestingly, the Token Enemy Minority can overlap with this trope. The Working-Class Hero is a related trope.