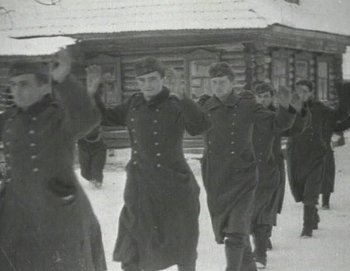 It recounts the Battle of Moscow and the Soviet victory of 1941-42, in which Soviet troops mounted a great offensive that flung back the Germans from the gates of the capital. After showing some of the good times of pre-war Russia—a youth parade in 1939, a military parade in 1940—the film cuts to the fall of 1941 and the German assault on the Soviet Union. The Nazis approach to within 15 miles of Moscow before the Russians throw them back. The Russians attack with tanks, planes, infantry, ski troops, and cavalry, while women and civilians dig anti-tank ditches and man factories back in Moscow.

Moscow Strikes Back was one of four documentaries that won Oscars at the 1943 ceremony, the first to give out documentary awards. It is a relic of that brief period 1941-1945 when the United States and the Soviet Union were allies. Compare the dramatic film Mission to Moscow.