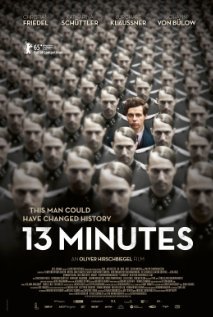 This 2015 film, originally released in German as Elser – Er hätte die Welt verändert (Elser - He Would Have Changed the World), chronicles the attempt by German Georg Elser to assassinate Adolf Hitler on November 8, 1939. Using a bomb planted in the podium where Hitler spoke at a Munich beer hall, it missed by only thirteen minutes due to him departing from the hall earlier than scheduled. Directed by Oliver Hirschbiegel, starring Christian Friedel as Georg Elser, with Katharina Schüttler, Burghart Klaußner and Johann von Bülow in supporting roles.