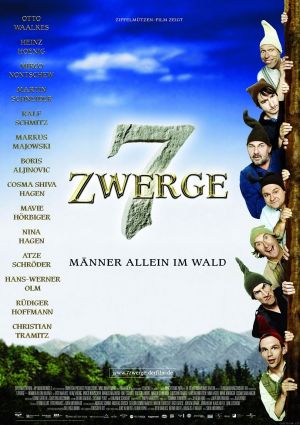 7 Zwerge - Männer allein im Wald (7 Dwarves - Men Alone in the Woods) is a 2004 German comedy based on the fairy tale Snow White.

The seven (human sized) dwarves, Brummboss, Tschakko note A tschako is a fur hat originally worn by Hungarian Hussars, Sunny, Cloudy, Speedy, Cookie, and Bubi note German slang for boy, live alone in the woods. All have been wronged by women in some way and resolve to never allow women into their woods. Meanwhile, the evil Queen is reluctantly informed by the Magic Mirror that she's no longer Fairest of Them All per se. She decides to capture Snow White and give her a bad hairstyle to restore her status. However, Snow White goes on the run and ends up taking refuge with the dwarves. Hilarity Ensues.

It later received a sequel, 7 Zwerge - Der Wald ist nicht genug (7 Dwarves - The Forest Is Not Enough), very loosely based on the fairy tale Rumpelstiltskin. Set a year later, Rumpelstiltskin shows up to eat Snow White's baby, unless she can guess his name. The now separated dwarves must regather and go on an adventure to discover Rumpelstiltskin's name, while avoiding his plots to kill or distract them.

Tropes common to both movies: