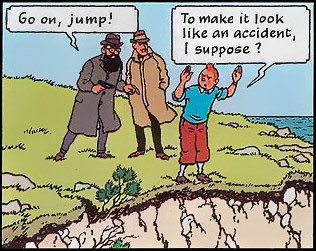 There's a person in the way. Maybe it's an Intrepid Reporter, or one of those Meddling Kids. It would be convenient if this inconvenient individual could be removed from the picture... permanently. But a murder rap would really make things even more inconvenient, especially if you're a Villain with Good Publicity who really cannot afford bad publicity. So your primary option as a Big Bad is to hire someone to take care of this little problem. But it can't look like murder, and it can't just be a mysterious death.

So what's the alternative? Make It Look Like an Accident. The villain or other inconvenienced party tells an assassin or other person that the inconvenient person has to die in a way that looks like an unfortunate happenstance, so suspicion will not fall on themselves or anyone else.

Note that the simple invocation of this trope is usually considered justification enough that the villains are playing by "real world rules", even if what they actually do can't be construed as being an accident by any stretch of the imagination.

This trope is probably thought of by many soon-to-be murderers, and so, a Truth in Television. Remember, just because it was ruled as an accident doesn't necessarily mean it truly was. Heh... heh... heh...

One reason a character may do this is to quickly gain their inheritance. In America (and many other countries), a person convicted of a crime is forbidden by law to keep any money they make as a result of the crime, so anyone killing for inheritance or a life insurance payout would probably try to make it seem like an accidental death.

Often used as a method of attempting to Murder the Hypotenuse, and as an excuse not to just shoot the bastard. If made to look like a death by animal attack, This Bear Was Framed. A more elaborate military murder, with the same intent, is the Uriah Gambit. Similar to the inverted form of Murder by Mistake, in which a murder is dressed up to look as if the killer got the wrong victim. When the villains want to make it look like someone else did the killing, it's a Frame-Up.

Super-Trope to Hunting "Accident". Sister trope of Never Suicide, where the murder is made to look like a suicide. Overlaps with Unfriendly Fire, depending on how careful the killer was to get caught. Compare with The Coroner Doth Protest Too Much and Mistaken for Suicidal. Contrast with Suicide, Not Murder.