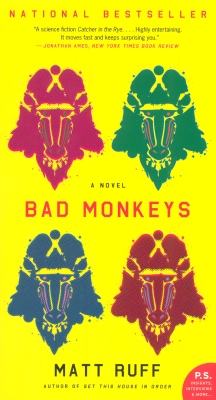 This is a 2007 book by Matt Ruff. Jane Charlotte has been arrested for murder. She tells police that she is a member of a secret organization devoted to fighting evil; her division is called the Department for the Final Disposition of Irredeemable Persons — "Bad Monkeys" for short. The confessions earns Jane a trip to the jail's psychiatric wing, where a doctor attempts to determine whether she is lying, crazy — or playing a different game altogether. The answer is yes.

Spoiler Alert: Due to the nature of this book, there are a lot of spoilers in the trope list.