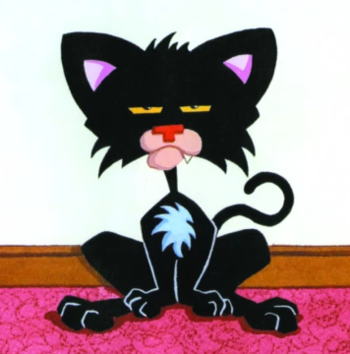 Bad Kitty is a series of children's books written by Nick Bruel, beginning with the picture book Bad Kitty in 2005. The series follows the titular bad Kitty, a black cat who is extremely prone to temper tantrums, especially when she doesn't get her favorite foods. She shares her dwelling with the drooling simpleton dog Puppy, who stars in the sequel picture book Poor Puppy.

The book was widely popular, and received a more fleshed-out sequel in Bad Kitty Gets a Bath. This spun off into a franchise of black-and-white illustrated chapter books, which introduced more characters, such as several other neighborhood cats and a new human baby in Kitty's family. The chapter books, originally printed in black-and-white, would later be re-released in full color. There is also a series of shorter paperback picture books.

Tropes seen in the series include: