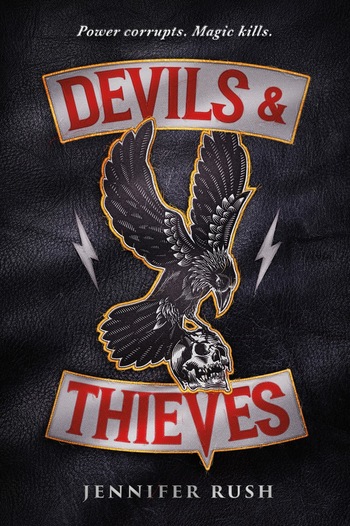 Devils & Thieves is a 2017 fantasy novel by Jennifer Rush.

In the small town of Hawthorne, New York, exists a community of magical users known as the kindled. Jemmie Carmichael is one of them; however, she finds it hard to cast even a simple spell due to her extreme sensitivity to magic, which makes her feel sick even just being around a large group of other kindled. At the same time, she has a very troubled relationship with the leader of the local Kindled gang, Crowe, as well as a rocky relationship with her father.

All of this comes to a head when the annual Kindled festival rolls around, bringing other kindled gangs to Hawthorne, most of whom have a bone to pick with Crowe and his Devils's League... Soon, Jemmie is forced into the conflict, and must learn to use her innate powers to help her friends.