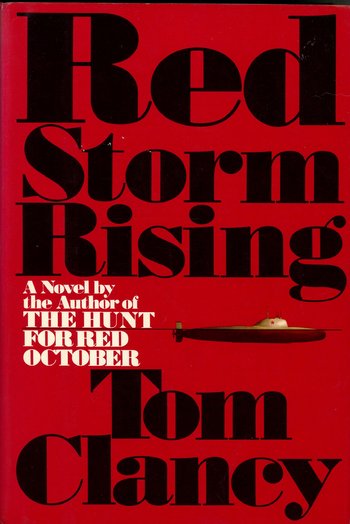 Red Storm Rising is an 1986 Doorstopper of a novel (830 pages). It is one of Tom Clancy's most famous works and is apparently on the syllabus of several military academies.
Advertisement:

Co-written with Larry Bond (creator of the Harpoon game series, which Clancy had used for The Hunt for Red October), this novel tells the story of a conventional World War III between the Warsaw Pact and NATO in the late 1980s.

When a Soviet petro-chemical plant is destroyed by Islamist terrorists, the USSR realises it's seriously short of oil. So they decide to invade the Persian Gulf. To do that, they need to deal with NATO. They do this via launching an invasion of Western Europe, which they justify on the basis of a False Flag Operation to bomb the Kremlin and blame it on West Germany.

The war starts and the novel focuses on some of the people in the war. There are Loads and Loads of Characters, but the main ones include:

It's not 100% accurate, with Bond and Clancy making some alterations to the scenario to stop the thing turning into a nuke-fest; e.g., the Soviets deciding not to use chemical weapons, which NATO would have interpreted as a license to go nuclear; and also having the Soviets place their boomers in their territorial seas to free up their submarines for anti-convoy missions (there was a dispute among Western analysts as to the point of the Soviet sub fleet, so they chose one of the two options).

Somewhat uniquely among Clancy's work we aren't really supposed to be taking sides. Certainly the Communist government is pretty evil, but mostly outside them and definitely all the actual soldiers are shown to be equally heroic and just doing their jobs. It makes for an odd read as the same events are told through opposing view points but makes for a much more effective look at war. No-one's evil and no-one's driven by hatred or vengeance, people are just following orders and doing their jobs... except the KGB, which is pretty much rotten to the core.

The book was made into a submarine simulation game by Sid Meier and MicroProse in 1988. In more recent years, a fan made it into a free campaign for the naval game Dangerous Waters. Sonalysts liked it so much they put it on an extras disc in the European edition. Another fan-made campaign

was also made for Ghost Recon in 2010. A spiritual successor to the MicroProse game, called Cold Waters, has been developed by Killerfish Games.

...and from these trends is able to conclude that the Soviet Union is gearing up for war.