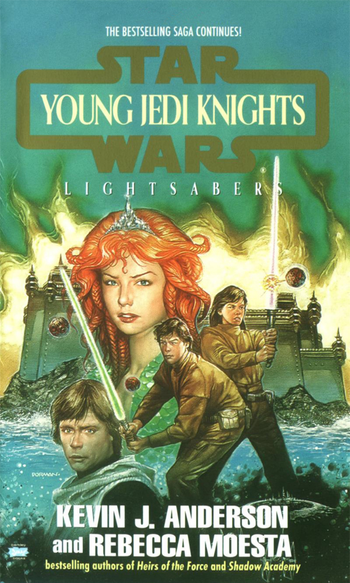 Han Solo and Leia have kids. They're studying at Luke's Academy. Chewbacca's nephew is also there, as is the daughter of those people from The Courtship of Princess Leia.

It's basically X-Men with lightsabers. The series started out with typical Imperial remnants-related plots, then gradually diversified (no pun intended) to include the kids fighting a much broader array of enemies, with well over a dozen books in the total arc. Many of the characters here would go on to be foundation-level players in subsequent EU works. Expect many of Kevin J. Anderson's characters (Tionne, Kyp Durron) to make an appearance as well.

Not to be confused with Junior Jedi Knights, a similar series mostly from the same co-author (Rebecca Moesta) focusing on Anakin Solo's time at the Academy.

This work provides us with examples of: