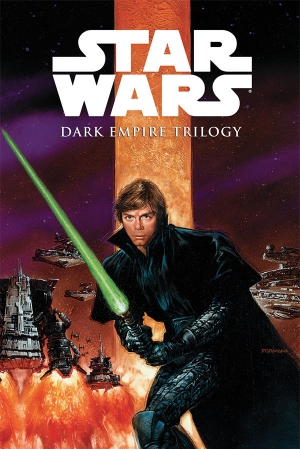 Darth Luke and "the Emperor had clones!"
Advertisement:

which had a somewhat modified script. A sample can be heard here.

Six years after the Battle of Endor — that's one year after Grand Admiral Thrawn's return, retaking of much of the Empire, and death — Luke hears rumors of a new Emperor taking the reins, except it turns out not to be so. Enter Palpatine, having moved his spirit to a clone body in a hidden place at the center of the galaxy. And boy, does he have a revenge plan. It involves turning Luke Skywalker to the Dark Side, Body Surfing from clone to clone in order to be immortal, using a planet-destroying gun, sending out machines called World Devastators to chew up the Mon Calamari homeworld, and enslaving the universe. He's been plotting to enslave the universe since he was smacking other babies with his rattle, so of course he's not finding new goals now.

Despite what some may say, the old EU canon (now Legends) was more internally consistent than most, but this series tended to be ignored fairly often during the early era of the EU, mostly due to all the retrogressive things that happened during it. A few things are acknowledged: Han and Leia had a son that they named Anakin, who went on to be pretty important. The first Rogue Squadron game, mostly set between the movies, had a final level where the player was Wedge Antilles on Mon Calamari, trying to take down the World Devastators. In the Hand of Thrawn duology, the subject of the Emperor's return comes up and Mara Jade — who was his Hand and could hear his instructions from across the galaxy — doubts that this Emperor was really Palpatine. Mara, having gone to the Dark Side herself for a while, also suggests that Luke has been slightly tainted by it ever since. Luke Skywalker and the Shadows of Mindor has a body surfing villain think about how Palpatine had a similar plan to his, but involving clones, and since the villain in question was never able-bodied, he's going a different route. Additionally, the E-wing starfighter makes its debut, and in later books and comics would become one of the most common go-to machines when a writer wanted to utilize a fighter other than the four Rebel fighters from the films.

However, with the release of the prequel trilogy, Palpatine's resurrection through cloning is made much more in-character to the point that it almost seems like a Call-Forward. He apparently never discovered the secret of eternal life in the same body that Darth Plagueis strived towards, so he settled for possessing clones instead. Also notably, this comic also brought back Boba Fett ("The Sarlacc found me somewhat indigestible."), who made many further EU appearances post-Return of the Jedi as a result.

Last but not least, even after the 2014 Continuity Reboot, the final film of the sequel trilogy, The Rise of Skywalker, would end up sharing several plot elements with Dark Empire. Most notably by having Palpatine once again resurrect himself by possessing a clone body, along with attempting to build a New Empire by mass-producing superweapons.