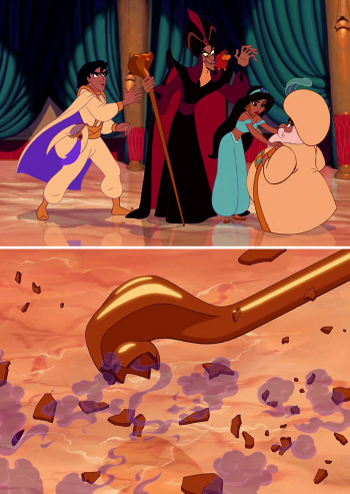 A villain can use any weapon against the side of good, whether it be a gun, a supernatural/magical item, an electronic or whatever item you can use as a weapon. The hero stands no chance against this weapon and it becomes apparent that there is only one thing to do in a situation like this, they must destroy the weapon.

Destroying the weapon can cause a whole lot of things to happen, like if the villain's power stems from the weapon if it is magical/supernatural, so destroying it will cause the villain to lose that power and also can cause whatever magical/supernatural influence the weapon has caused to be un-done. As for any normal weapons like guns and tanks, they can be destroyed through realistic means like being melted, blown up, etc. They can also be destroyed through mundane means as well like a hammer.

Bottom line: these are instances where the villain has a weapon that gets destroyed and it can cause the good side to gain an advantage against them.

Compare to Wrecked Weapon, which only applies to heroes whose weapons get wrecked. For the case of handguns, see Disarm, Disassemble, Destroy.

This trope usually occurs during climaxes and endings, so beware of unmarked spoilers!

You destroyed my fan blades!

You destroyed my fan blades!