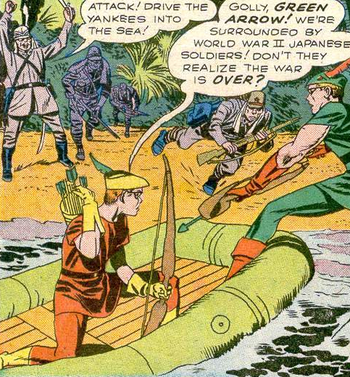 Golly!
"Although the Clone Wars were over, some people never seemed to get the message."
— 501st stormtrooper, Star Wars: Battlefront II
Advertisement:

The Remnant can be best described as a more militaristic version of Last of His Kind, being members of a faction who are continuing to fight a war that their side has already lost. Basically a (usually villainous) version of La Résistance that formed from the remains of The Empire or some other faction. They may be using irregular military tactics, but they will probably still be dressed in their old uniforms (or the remnants thereof). Unlike a General Ripper, The Remnant no longer hold an official position in the armed forces, often because their government has ceased to exist or has been replaced. In a number of cases, this happens because nobody on either side has yet been informed that the war is over. The losing side then becomes The Remnant by default after the fact.

This happens pretty often in real life, especially for defeated factions where surrender's not an option — or ones that aren't prepared to admit defeat just yet. In particularly nasty cases, two strong-but-not-overpowering factions can alternate between being really weak central governments and really strong Remnants, sometimes for a generation or more (and restoring peace to a population accustomed to war and violence is going to be tricky, too).

A Remnant using guerilla warfare can be much more dangerous than they were as an established government; guerillas are constantly on the move, and have the luxury of always getting to choose which target they'll attack next. The standard advice is that you need ten soldiers for every guerilla to defeat an insurgency, which means a lot of money and sustained effort, which means that an occupying army will sometimes just give up.

For a short-term 'bigger brother' counterpart to this, see Dragon Their Feet; in fact, a Dragon who missed the last battle is likely to end up leading these guys. They may also be a Vestigial Empire, and the government they're trying to overthrow is likely The Federation (or The Good King in fantasy, where this trope's rarer but not unknown).

This trope tends to involve a bit of Protagonist-Centered Morality. Good guys who do this are Determinators and La Résistance and extra heroic for fighting in the face of near-impossible odds. Bad guys are just exasperating for refusing to go away. See also Your Terrorists Are Our Freedom Fighters and Villainous Legacy. To characterize a faction more or less accurately, look at its history, the level of legitimacy it can claim, what it stands for, and — above all — the methods it uses.

One man's Resistance is another man's Remnant. Government in Exile is the civilian equivalent while The Remnant is military. Still Fighting the Civil War is when both the military and government have ceased to exist but sympathizers still remain. When the remnants are from Those Wacky Nazis, they will likely try to establish the Fourth Reich.

Most heroic examples of this trope tend to be in Zombie Apocalypse fiction, and similar genres.