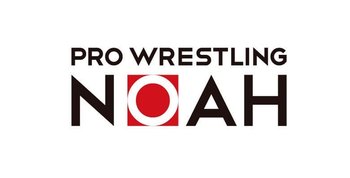 Pro Wrestling Noah (stylized as Pro Wrestling NOAH) is a Japanese Professional Wrestling promotion. It came into being after All Japan Pro Wrestling owner and promoter, Shohei "Giant" Baba passed away in 1999 and its presidency was passed on to Mitsuharu Misawa, then one of AJPW's biggest stars. However, disputes with Baba's wife over the direction of the company lead to him being ousted from the position a year later. This in turn lead to Misawa leading an exodus of all but two AJPW's native roster and forming their own promotion where they have more freedom to do things they weren't allowed to in AJPW. The new company was established in 2000.
Advertisement:

The company would become the No. 2 company in Japan, challenging New Japan Pro-Wrestling for the No. 1 spot through the earlier 2000s. During this time, NOAH built itself with matches with a existing Junior Heavyweight Championship division with the likes of KENTA and Naomichi Marufuji, and several interpromotional matches with NJPW and later AJPW. The main event was built around the likes of Misawa, Yoshihiro Takayama, Jun Akiyama and Kenta Kobashi, putting on 5 star matches just as they had done in AJPW.

However, as the company progressed, its ageing NOAH stars were slowly starting to break down (Kobashi went out with cancer, Akiyama and Misawa were suffering from back problems), they needed to be replaced with new talent. However, every attempt to push to a new wrestler into the main event (Takeshi Rikio, Naomichi Marufuji, Takeshi Morishima) failed, and the company would soon plunge in popularity, losing their TV deal and their ability to draw huge crowds.

Due to the pressures of his failing company, Misawa would continue push himself beyond his physical capabilities. Despite suffering from several neck pains, and a knee injury that led to him becoming overweight, Misawa kept himself in the spotlight, hoping to get Go Shiozaki over, working the exact same style as the previous 25 years of his career. Sadly, on June 13, 2009 Misawa would push himself too far. During a tag team match between himself and Go Shiozaki against Bison Smith and Akitoshi Saito, after a regulation backdrop from Saito, Misawa lost consciousness. Misawa was taken to the hospital, but it was too late. Misawa was pronounced dead at the hospital. The cause of death was speculated to have been a cervical spinal cord injury, which Misawa had been carrying for the 3 previous years, that caused cardiac arrest.

With the death of Misawa, Pro Wrestling NOAH would be passed into the hands of Akira Taue. However, despite his control, the company would continue its decline, becoming a shadow of itself. It was still considered an important member of the Global Professional Wrestling Alliance despite this, though the GPWA fizzled out. In 2014, one of the faces of the company—KENTA—left for an ill-fated run in WWE.

As of the last few years, despite changing ownership, NOAH has been recovering under the stewardship of Misawa's final protege, Marufuji. Running counter to the old guard of talents like Shiozaki, Takashi Sugiura and Marufuji, a new generation of wrestlers has arisen in Kenoh, Katsuhiko Nakajima, and Kaito Kiyomiya in the heavyweight division, and the RATELS faction of Daisuke Harada, Tadasuke, YO-HEY and HAYATA dominating the junior division.

In 2020, NOAH was purchased by the Japanese digital advertising firm CyberAgent, which had purchased DDT Pro-Wrestling three years earlier. Upon the purchase, DDT executives took over NOAH's operations. Shortly thereafter, CyberAgent established CyberFight as the umbrella brand for its wrestling properties, which continue to maintain their separate identities.

This promotion contains examples of: