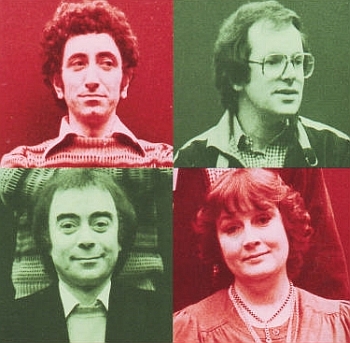 How To Pose For Strangely-Coloured Photographs The Burkiss Way, as demonstrated by Fred Harris, Nigel Rees, Chris Emmett and Jo Kendall. (Denise Coffey was appearing as a jar of vapour rub at the Old Vic.)
Advertisement:

Broadcast from August 1976 to November 1980 on Radio 4, former radio show The Burkiss Way To Dynamic Living is the product of the disordered minds of brain-men Andrew Marshall and David Renwick. Spinning off from two half-hour specials the pair had written spoofing the BBC's Open University educational programming (under the title 'Half-Open University') The Burkiss Way was initially presented as 'the first correspondence course for radio', supposedly delivering a set of life-lessons devised by one Professor Emil Burkiss, with each episode tackling a different subject encapsulated in its title: Peel Bananas The Burkiss Way, Solve Murders The Burkiss Way, etc.

Over the course of the first series, which starred Chris Emmett, Nigel Rees, Fred Harris and Denise Coffey, the show's adherence to this conceit gradually loosened; By the middle of the second series (in which Denise Coffey was permanently replaced by I'm Sorry I'll Read That Again's Jo Kendall) the idea had been abandoned completely except as a vague Framing Device to be called on whenever the writers felt like it, and the show had taken on its true form as a surreal, absurdist sketch show mingling satire, parody, innuendo, and Pythonesque deconstruction of the radio medium itself.

The show developed an immediate cult following, its recording sessions attracting audiences so large they starting spilling out of the seats and onto the stage. Unfortunately, its chances of a breakthrough to mainstream popularity were scuppered somewhat when it and everything else on radio were overshadowed by the blockbuster mega-success of the original Hitchhiker's Guide to the Galaxy. The fact that Douglas Adams had contributed several sketches to early shows didn't stop them thereafter spoofing it and him (as "Mr. Different Adams") from an only semi-fake position of bitterness and jealousy. It also really didn't help that Adams had explicitly based the character and temperament of Marvin the Paranoid Android on that of Andrew Marshall, who was naturally inclined to revenge.

It can be heard in periodic re-runs on BBC Radio Four Extra (formerly Radio Seven).

...see you next week folks, and happy dynamic troping!