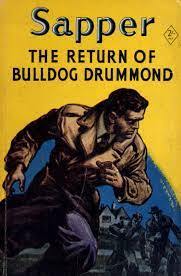 Captain Hugh "Bulldog" Drummond is finding life boring now that the War is over. He meets an attractive young woman whose father has become entangled in an international conspiracy to overthrow the British Empire...

The novel had over a dozen sequels and inspired around two dozen films. (The 1929 film Bulldog Drummond was the talkie debut of actor Ronald Colman.) The film series had its last gasp in the 1960s; by then, it was transparently attempting to attract the audience of the Bond movies. Interestingly enough, Ian Fleming once stated in an interview that Bulldog Drummond was exactly the sort of character that he was trying to avoid when he was writing Casino Royale, wanting to create a man in James Bond that was far more realistic in both his abilities and that of the diminishing power of his beloved Empire, but later admitted that Bond was "'Sapper' from the waist up."

The series was popular in its time and influenced the development of the pulp thriller. It was so popular, it inspired parodies: P. G. Wodehouse's Leave it to Psmith includes a protracted and not unaffectionate parody of the first novel's opening, but it has aged badly because of its heroes' casual nationalist and racist bigotry. Modern references (as in Bullshot, The League of Extraordinary Gentlemen, and Kim Newman's "Pitbull Brittan") are most often bitingly satirical in the vein of "They don't make 'em like that any more and the world is better for it".