Series / Not the Nine O'Clock News 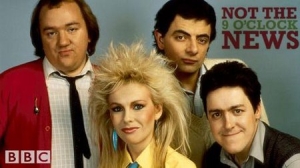 1980s British comedy Sketch Show which starred and launched the careers of Mel Smith, Griff Rhys Jones, Rowan Atkinson, and Pamela Stephensonnote Stephenson would later become a cast member with Saturday Night Live for the show's tenth season from 1984 to 1985

A mixture of conventional sketches, brief non sequitur punchlines of the type later popularized by The Fast Show, musical numbers and biting political satire, it was so called because The BBC put it on BBC-2 opposite their own BBC-1's Nine O'Clock News. After a long fallow period during the post-Monty Python era, its mix between alternative comedy and social commentary was the next big thing in British TV sketch comedy, and inspired a boom in the genre during the rest of the 1980s.

The team had a particular fondness for taking real footage and inserting their own around it - for example, having a drunken, swearing Atkinson go put on a blonde wig and blue dress, walk through a door, and then switch to some real footage of Margaret Thatcher leaving Downing Street.

Smith and Jones went on to continue their partnership with Alas Smith and Jones, Atkinson struck out on his own, notably with Blackadder and Mr. Bean, and Stephenson continued working on stage and screen throughout the 80s before switching careers to become a psychologist and university lecturer.

The series inspired an American export, Not Necessarily the News, which ran on HBO from 1982 to 1990.