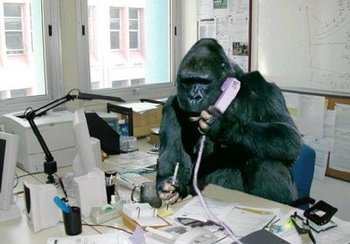 Oh, I see! Trying to figure out a way to deduct bananas?
Advertisement:

The tendency for animals to outperform their human coworkers in comedies. Most often takes the form of a gorilla or chimpanzee in a business suit who quickly climbs the corporate ladder after being hired. This trope can come in a few flavors:

Type One: Said monkey actually is competent, at least according to the other character's lampshading. Type one's competence is normally contrasted to another human character's incompetence for laughs. Type one never speaks, and other than being a part of the scenery, typically doesn't interact with the human characters physically unless their job requires it.

Type Two: This is when the monkey acts just like a typical monkey would, but the work environment is so atrocious to begin with this behavior actually lands the monkey promotions and praise from his coworkers. Unlike Type one monkeys, Type twos are free to interact with their coworkers, usually in the form of random tantrums, face-scratching, and the classic poo throwing.

Type Three: Type three monkeys are practically human in all but species. Type threes typically form rivalries with the Protagonist, but are otherwise portrayed as popular with the rest of the characters. While you are more likely to see a Type three courting the office hotty or chatting it up with the fellas at the water cooler, they do sometimes slip back into Type two territory, usually when tempted by a banana.

Has nothing to do with monkeys in Powered Armor.