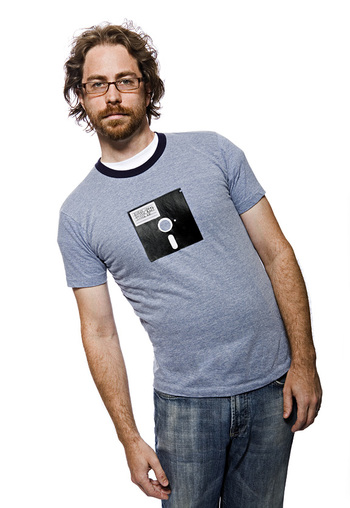 Just like you, only he writes songs.
"I find it hard to write about myself—or to write from a personal point of view. So the way I get around that is by writing from the perspective of a giant squid."
— Jonathan Coulton, in an interview

Jonathan Coulton (born December 1, 1970; occasionally shorted to "JoCo") is a primarily internet-based musician who writes songs on all sorts of stuff, though his more popular songs tend to cater to the nerd or pop-culture crowd. You probably know him best as the writer of Portal's ending song, "Still Alive". He also gained fame before that for his "Thing-A-Week" series of albums, wherein he challenged himself to write and record one song a week for an entire year, and actually did it.

Notable for being one of the first musicians to fully embrace the online model of earning money for his songs - most of his songs are available free on his website,

if you want to dig through his blog, but they're also all for sale through a variety of media. He also uses the Internet to gauge where to perform - if enough fans petition him, he'll plan a concert for you.

He often performs with Paul and Storm, and has done collaborations with MC Frontalot. He has been involved in several RiffTrax, including playing some songs before the live Plan 9 from Outer Space and writing the theme song. He's the resident musician on the NPR game show Ask Me Another. He is also the "Official Contributing Troubadour" of Popular Science magazine, and sang the opening theme for their podcast. He also has a handful of songs featured in Rock Band. As mentioned above, he wrote the credits song for Portal, "Still Alive", as well as the sequel's, "Want You Gone". He's also long-time friends with John Hodgman, has written songs for Hodgman's book tours (which he often participates in), and has appeared on all three audiobooks for Hodgman's Complete World Knowledge series. Lately, he's done the recap songs for BrainDead (2016). Basically, he's popular, is what we're getting at.

In other media, Coulton worked with Comic Book writer Greg Pak on a comic miniseries/graphic novel based on the characters from many of his songs, named Code Monkey Save World. The Kickstarter project finished with 872% of its goal.

You can go here

to vote for his best songs.

Tropes Related to this Musician Include: