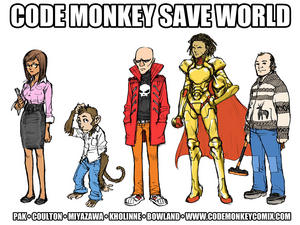 Our... er... heroes?
Greg Pak: It occurs to me that you could field a pretty awesome supervillain team with characters from @JonathanCoulton songs.
Jonathan Coulton: @GregPak DO IT!
—The tweets that launched everything.
Advertisement:

A collaboration born on the internet, Code Monkey Save World is (or will be - see below) a graphic novel/miniseries starring several characters from Coulton's musical works, thrown together in an attempt to save the world, hopefully managing to get the girl in the process. The comic was successfully crowdfunded on Kickstarter, and is being written by Greg Pak, penciled by Tak Miyazawa, colored by Jessica Kholinne, lettered by Simon Bowland, and released by Comixology and (the appropriately-named) MonkeyBrain Comics. The Kickstarter page may be found here.

Characters drawn from Coulton's works include: