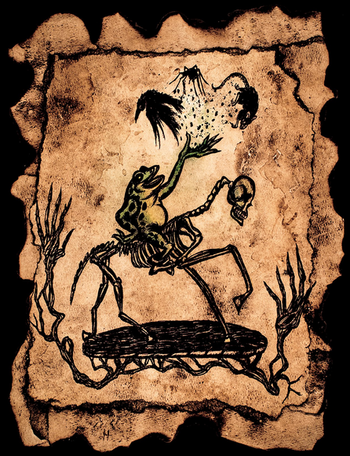 One of the less disturbing pages.
The Crawling King is a Horror Graphic Novel made by Einar Baldvin, and published by SBI Press.
Advertisement:

Long ago, there was a mighty kingdom called Gyldenbrae. The kingdom has since fallen, but how? Well, there is a book that could answer that question. But here's another...

Are you sure you want to read it?

The Crawling King is presented in the form of an old book containing a number of legends, manuscripts, and first-hand documentaries about the people of Gyldenbrae, events that occurred there, and the various horrors that brought them to their end. The paper has even been artificially aged with coffee and burned with fire to complete the illusion of it being an ancient text from a long fallen forgotten Kingdom.

The Crawling King contains examples of: