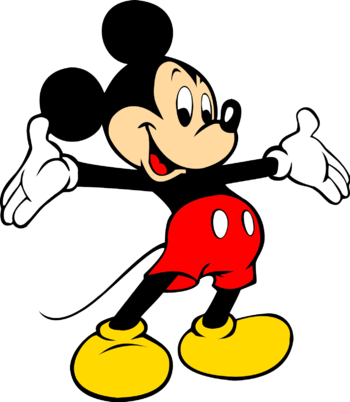 "Do you ever wonder why we're always, like, wearing gloves?"
— Bobby Zimmeruski, An Extremely Goofy Movie
Advertisement:

Common accessory for 'cartoony' characters, especially those from the early 1900s and shout outs based on that era. Simply, the character wears puffy white gloves, even if he doesn't wear much else. The gloves can be any length, and at least cover the whole hand (and all four of its fingers). Those that cover only the hand may occasionally have a wrist band and knuckle indentations as well.

The main reason for their use was probably that it had the practical effect in an era of black and white cartoons where a mostly dark colored character could hold his hands against his chest and still have the hands be visible; Felix the Cat is notable for not wearing White Gloves and demonstrates the problem this trope addresses.

As culture and technology have marched on, it's stuck around simply as animation tradition. Though they still help emphasize that a Talking Animal actually has hands and makes it much easier to display hand gestures and movement. Oddly enough, characters based on birds don't wear white gloves and are often depicted with Feather Fingers instead (with Woody Woodpecker and José Carioca being notable exceptions).

Cartoon characters that have white feet, like many cartoon cats, usually also have white hands that have the same effect as White Gloves.

Note: this entry is for inexplicable white gloves on cartoon characters, not realistic humans that wear gloves as part of a normal outfit.

Additionally, the gloves don't necessarily have to be white; that's just the most common color for this trope, as any color that creates a contrast should qualify (i.e. Pac-Man's orange or brown gloves contrasting against his yellow body).

Compare with and Subtrope to Conspicuous Gloves. See Clothing Appendage if the "white gloves" are the actual color of their hands on otherwise colored arms.