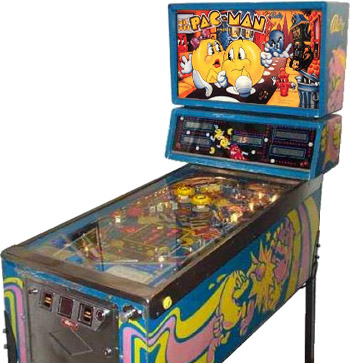 This is how you spent your honeymoon?
"Pac-Man Aggressive!"
Advertisement:

Mr. & Mrs. Pac-Man Pinball is a Physical Pinball Table produced by Bally/Midway in 1982. It was designed by George Christian, and was the first of two Pinball Spin-Off games Bally made for the popular Pac-Man franchise.note The second being Baby Pac-Man

This title is remarkable for being an early attempt at combining a Pinball with a Video Game. Embedded in the center of the playfield is the "Vid-Grid Pac-Maze", a five-by-five matrix of lights. The player earns Moves and extra lives by playing the pinball table, and can enter the Maze by shooting one of the two saucers after he has at least six Moves. Using the flipper buttons,note left flipper to choose the direction, right flipper to move one space the player makes Pac-Man (a flashing yellow light) light up all of the spaces, while avoiding the Ghost, a flashing red light. The player can escape by moving Pac-Man around the edges of the maze, or earn "Pac-Man Aggressive" on the pinball table to catch the Ghost instead.

Not surprisingly, the popularity of all things Pac-Man pushed this table to become the best-selling pinball of 1982. Also unsurprisingly, Mr. & Mrs. Pac-Man played as well as you might expect — while the pinball table was reasonably challenging, most players found the Vid-Grid severely derailed the flow of the game. Unfortunately, playing the maze game was essential for high scores and extra balls, so it quickly became That One Level which everyone had to repeatedly endure.