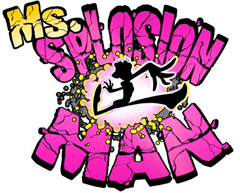 When the evil scientists finally manage to capture the deranged 'Splosion Man, the resulting celebrations inadvertently create Ms. 'Splosion Man. Sadly for them, her love of pink, shoes, and dancing takes second place to her love of 'sploding.

Taking advantage of her 'splosive talents, players guide her through an assortment of death-laden levels going through the laboratories, a resort, and a factory. Aside from much more varied locations, levels have multiple paths defined by varying degrees of difficulty, mid-air checkpoints for more difficult moments and a shopping mall to purchase unlockables.

The game was later released on the Nintendo Switch on November 22, 2018.