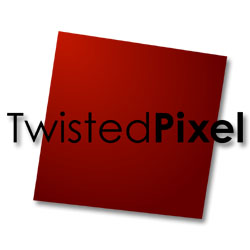 Twisted Pixel Games is a Texas-based independent game developer (who was a first-party developer for Microsoft Studios from 2011 to 2015) founded in 2006 by Michael Wilford, Frank Wilson and Josh Bear. Known for leaning on or smashing down the fourth wall, their games emphasize fun and humor. They also make some pretty catchy (and funny) soundtracks. The company aims to become one of the leading developers of digitally distributed video games.

Twisted Pixel introduced itself to the world with The Maw, a platforming game centered around an alien boy and his ever hungry pet Maw. It game won the 2008 "PAX 10" Audience Choice award and gained itself mostly positive praise from the critics upon release, despite its relatively short length.

The company's second title, 'Splosion Man, was a platformer released in 2009. An experiment Gone Horribly Right, the titular 'Splosion Man attempts to escape the evil scientists within the Big Science labs by 'spolding his way through 50 obstacle-laden levels. It also featured co-op, capable of up to four players, with its own unique levels. The game was met with a very positive response; many critics cited its unique premise, design and oddball humor. It received an Even Better Sequel called Ms. 'Splosion Man in 2011.

In 2010, Twisted Pixel released the action platformer Comic Jumper: The Adventures of Captain Smiley. The hero has fallen far from his days of commercial success, so Twisted Pixel offer to restore the Captain's popularity and get his comic restarted by allowing him to guest star in other comics. Critics noted its complete lack of a fourth wall, tough difficulty and enjoyable humor. Overall, it was very well received.

Likewise known for having many a familiar voice actor who's ever worked for Funimation voice some of their characters, since the company is not that far from them (Funimation is based in Flower Mound, Texas).