Stuffy Old Songs About the Buttocks 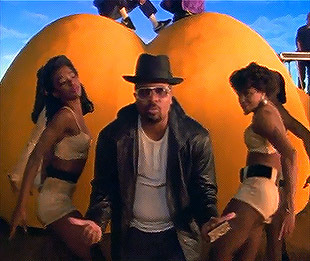 Bow down to the king. Now turn around, stick it out.
"Some singers sing of ladies' eyes
And some of ladies' lips,
Refined ones praise their ladylike ways,
And coarse ones hymn their hips."
— Ogden Nash, "The Clean Platter"
Advertisement:

A variety of love song or lust song that either addresses or references a specific part of someone's anatomy — their arse.

Generally, this will involve the singer either admiring the buttocks of the possessor or encouraging the listeners to shake that plump bi-domed anatomical feature, shake it good.

Contrast with Intercourse with You, where the song moves on from specific features to associated activities. Joke of the Butt can often be employed.

Despite the name, these songs are seldom stuffy or old. Not related to stuffing something into the buttocks.

References and parodies in works: