Music / The Presidents of the United States of America 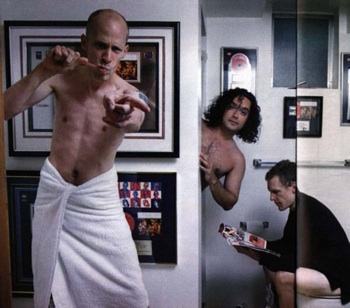 To clarify, The Presidents of the United States of America have no actual presidents in their band. Just so we're clear.

The Presidents of the United States of America — also simply known as The Presidents, POTUSA, or simply PUSA; their name is a mouthful even for diehard fans — are an Alternative Rock band, formed in Seattle, Washington in 1993, who went on to release six albums and be twice nominated for Grammy awards. Their style combines the frenetic pace of Punk Rock with Pop, Grunge and Country Music influences, which made them slightly atypical of the Seattle scene. For much of their existence they were made up of vocalist and "basitarist" Chris Ballew, drummer and vocalist Jason Finn with "guitbassist" and backup vocalist Dave Dederer. When Dederer left to settle down and raise a family in the 2000s, Andrew McKeag stepped in to take his place. The "basitar" and "guitbass" were themselves modified guitars, one with two bass strings and the other with three guitar strings, both drop-tuned to C#.

Originally, the band played their music with a primitive drum machine (as heard on their early demos) before Jason Finn joined. They released their debut, Self-Titled Album in 1995 on PopLlama Records. The record, on the strength of memorable singles like "Lump" and "Peaches," gathered such a following that it was re-released on Columbia Records later that year, and was certified triple platinum. The follow up, II, was certified gold and didn't match the sales or the critical praise of its predecessor. After three years of touring, Ballew decided to spend more time with his kids and called it quits on the Presidents with the release of Pure Frosting, which combined new material with live tracks and demos. Notably, this record contains a cover of Ian Hunter's "Cleveland Rocks," and this version became the theme song for The Drew Carey Show.

The hiatus didn't last long, and the band reformed in 2000 to release a new single, "Jupiter," and thus a new album, Freaked Out & Small. It got good reviews, but sold 25,000 copies, and the band dissolved again only to reform again in 2004 to release Love Everybody, and later These Are the Good Times People in 2008, both on their indie label, PUSA Inc. Their last album, Kudos to You! was released in February of 2014, released via PledgeMusic and preceded by the video for "Poor Little Me."

The group have had a multitude of side projects, most notably Subset, a supergroup with Sir Mix-A-Lot whose album never wound up being released. Additionally, Chris Ballew

, a very prolific songwriter, has done (amongst other things) a one-man side project called The Giraffes, made a series of Ambient music tracks, and has released albums of music for kids under the name Caspar Babypants. Yes, really.

In November of 2016, Chris Ballew took to the band's Facebook page to clarify as to why the band hadn't had much activity in the past year and a half - turns out the band decided to hang it up.

Or, as Ballew put it, they'd "quietly retired from the PUSA business since we are OLD PEOPLE NOW! ;)"

Thus, the band leaves behind one of the goofiest bodies of work in alternative music this side of Ween.

"Scrolling to the trope list, gonna eat a lotta peaches..."