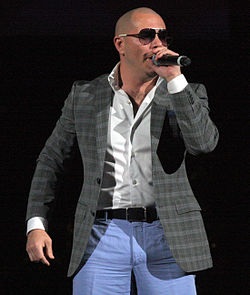 He can't promise tomorrow, but he promises tonight. Dalé!
"WHOOOOOOWEE!"
— Pitbull's introduction in every song he appears in.
Advertisement:

Pitbull, aka Armando Christian Peréz (born January 15, 1981 in Miami, Florida), is an American rapper, songwriter, world traveler, and producer from Miami. He is of Cuban descent, and his family arrived in the United States after the Mariel boatlift. He began gaining popularity outside the local and underground scene during the latter half of the 2000's.