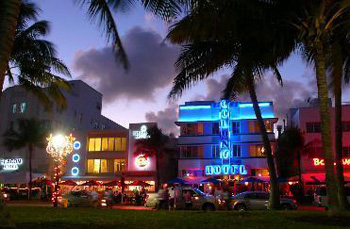 Sun! Sand! Pastels! Ahh, it's good to be home.
Party in the city where the heat is on,
All night, on the beach 'til the break of dawn;
Welcome to Miami,
¡Bienvenido a Miami!
— "Welcome to Miami", by Will Smith
Advertisement:

You may wonder why we're quoting a Will Smith song. One, it's a song that one associates with the city (CSI: Miami itself used it once). Two, it sums the bilingualism of the city pretty nicely. Miami is the most Latin city in the U.S.- with 66% plus of the residents speaking Spanish as their first language. 34% of the city's population are of Cuban descent; there are more Cubans living in Miami-Dade County than in any city except Havana.note The City of Miami is artificially small, and not a fair comparison, as the Miami urban area extends well beyond city limits. See more below.

Before we go on, we should mention that although there is in fact a city in Florida law called the City of Miami, whenever people talk about "Miami", they're really talking about Miami-Dade County. This is because the City of Miami, for various historical and legal reasons, has had limited room to expand its borders, and is therefore very small geographically—35.68 square miles of land (for comparison, Washington, D.C., which has about 200,000 more people, has about 20 more square miles of land). On the other hand, none of this has stopped actual construction of city-like development outside the city's official borders, and as such Miami-Dade County consists of two things: areas that are basically city, and swamp. Nobody lives in the swamp, or goes there, or cares about it (except for alligators, environmentalists, criminals, and madmen); whenever you talk about Miami-Dade, you're talking about the urban area where everyone lives.

Miami is felt to be an intrinsically cool city - MTV loves the place, it's associated with the whole US Spring Break tradition and there are number of TV shows set there. Behind the camera, Miami is a major US media production center, especially for Spanish-language media, and is also widely known for music. Not to mention this is where Dave Barry lives, which instantly ups the cool level a bit.

The city also has a darker underbelly, especially in the 1980s, where works like Scarface (1983) and the hit '80s TV show Miami Vice were based off the major cocaine problem the city was dealing with at the time. The documentary Cocaine Cowboys covers the Miami drug war extensively. Today, the city is a common location for The First 48. Only in Florida, indeed.

As far as sports are concerned, Miami's on a shorter end of the stick - the Marlins only made the playoffs three times in their comparatively brief existence (but won the World Series the first two times), and the Miami Dolphins last won a Super Bowl in 1973 (though they are one of few repeat champions, having won in 1972 beforehand, where they put up the only undefeated season in NFL history). The Miami Heat are their go-to powerhouse, having won three championships in their history, including two in a row in 2012 and 2013. It feels like we're forgetting someone... ah, right. The University of Miami Hurricanes were also one of college football's premier dynasties in the 1980s.note Yes, there is an NHL team in Miami, the Florida Panthers. They actually made the Stanley Cup Finals in just their third year of existence, but haven't won a playoff series since and have only made the playoffs four times total, in a league where over 50% of teams make the playoffs. And they don't play in the city of Miami or even in Miami-Dade County; they play in Sunrise, in Broward County directly to the north. Most recently, the area added a Major League Soccer team in 2020, Inter Miami CF. While Inter is planning to build a new stadium in Miami-Dade, it's playing in Fort Lauderdale for now.

It should be noted that there is contention between Miami-Dade County and the rest of Florida, springing mainly from the Miami attitude that they are the only part of Florida worth a tinker's damn.

Also known for having some of the worst drivers in the nation. You DO NOT want to be on the road during rush hour.

A lot of movies have been set and filmed here, along with a number of past TV series, including a rather obvious one involving Ray Bans.