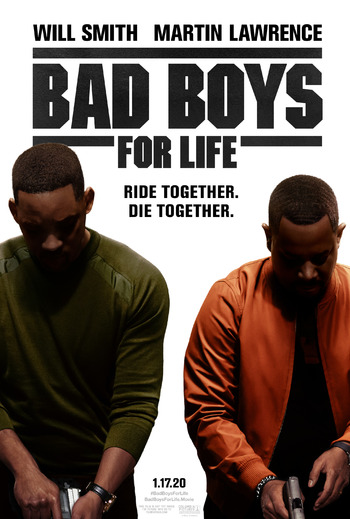 Ride Together. Die Together.
Mike: In these streets, I never trusted anybody but you. I’m asking, man, Bad Boys.
Marcus: One last time?
Mike: One last time.
Advertisement:

Bad Boys for Life is the third installment in the Bad Boys series of Buddy Cop Show films, released on January 17, 2020. Unlike the first two films, this one is not directed by Michael Bay (although he does cameo in it), but rather by Belgian directors Adil El Arbi & Bilall Fallah. Will Smith and Martin Lawrence return to reprise their roles.

Mike Lowery (Smith) and Marcus Burnett (Lawrence) are back as usual, though Marcus has hit a midlife crisis and wants to retire (for reals this time). However, when Mike ends up on a case that involves dealing with a Mexican drug lord looking for revenge for her late husband, the two team up for one last adventure to take her down.