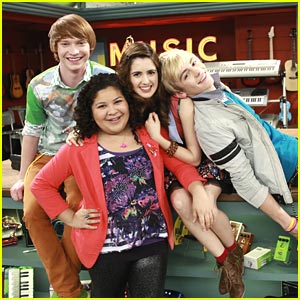 There's no way I can make it without you.
Austin: You're a songwriter with stage fright, and I'm a singer who loves being on stage! We're a perfect match!
Ally: Okay...we're partners!
Advertisement:

Austin & Ally is a Disney Channel sitcom that first aired in December 2011 and ended in January 2016.

Ally Dawson (Laura Marano) is an aspiring singer-songwriter with extreme stage fright who works at her father's music store at the Mall of Miami. Austin Moon (Ross Lynch) is an aspiring singer who visits the store one day and ends up finding her in the upstairs practice room the same time Ally is working on her newest song. After unceremoniously kicking him out, she is shocked when a day later, her good friend Trish brings news that Austin has become an Instant Web Hit overnight ("actually, it was more like two nights", Austin admits in an interview) but what really shocks her is the fact it happened with him singing her song.

After an episode's worth of misadventures trying to get Ally the credit she deserves, the two decide to combine forces. Ally writes the songs, Austin sings them, Trish de la Rosa (Raini Rodriguez) is Austin's manager and personal stylist, and Austin's friend Dez Wade (Calum Worthy) is their music video director. The show then focuses on whether or not they'll crash and burn as they finally make it, whether or not Ally will be big on her own, whether Austin and Ally will get together, and an assortment of standard Kid Com Wacky Hijinks.

Aired a crossover with Jessie in December 2012. The show was renewed for a fourth season due to popular fan demand, being the fifth Disney Channel live-action series to be extended past three, after That's So Raven, Hannah Montana, Wizards of Waverly Place and Good Luck Charlie (with Jessie later becoming the sixth). Austin & Ally is the first Disney Channel show that does not revolve around a family cast to get a fourth season, having less than 5 cast members and having a male co-lead.

Now has a Character Sheet. Please put all character-relevant tropes there.

Tropes found in this show

Dez is bad at cooking, and it shows.

Dez is bad at cooking, and it shows.