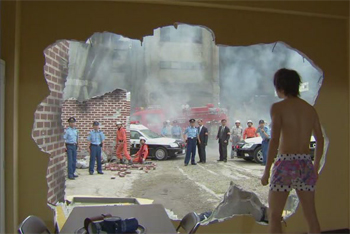 In his defense, most probably aren't expecting the wall to get breached when they're changing, either.
"I see London! I see France! I see [Insert Name Here]'s underpants!"
— Traditional children's rhyme accompanying such an event
Advertisement:

A Comedy Trope in which a character's underwear is exposed while other people are present, usually by accident, and much to their embarrassment. Generally involves Goofy Print Underwear or Uncool Undies. For extra embarrassment, the person might have their name written on their underwear. The primary use of this trope is comedy, catching a character in their most embarrassing state. Often this is the result of Defeat by Modesty. Fully-Clothed Nudity is the feeling this creates.

Compare Marilyn Maneuver for a specific situation in which this happens. Compare Panty Shot, which usually shows viewers up a girl's skirt while it's still up, but can overlap with this trope when said skirt is blown or flipped upward. In addition, Panty Shots are always played for Fanservice, while Comedic Underwear Exposure usually isn't.

The Bad Guys attempt to flee when caught stealing the Golden Dolphin trophy, but Mr. Wolf's grappling hook pistol rips his pants off instead.

Alternative Title(s): Standing There In Underwear, I See London

The Bad Guys attempt to flee when caught stealing the Golden Dolphin trophy, but Mr. Wolf's grappling hook pistol rips his pants off instead.